An excellent post–this is my comment to it:
This is one of those topics that is extremely rich for study, and even a little dangerous! I wonder if the list of events here are your own, or are drawn from a book. The Mesopotamian legacy seems foundational in the histories & mythologies of Near Eastern and Western civilizations, although systematized Egyptian theology seems earlier. Civilization is always at war with “primordial chaos” and that’s why we see the serpent figure of Tiamat also present in the marshes of the Egyptian Delta as Apep, the creature that battles with Ra.

Theology, as a system, arises from the interaction of various peoples, their Gods and their myths. But it always tends to become increasingly complex, and dare I say arbitrary in its detail, with imperialism. This is because the power of one state or group or region sets itself above the subjected others, and expresses the hegemony in divine terms. So, since the first Pharaohs (i.e. conquerors) of Egypt came from Nekhen in the South, they set their tutelary God Horus to a very high position, but that stature later declined somewhat because of rising influences from the solar theology of Ra in the North (the Pharaohs settled around that region), which was one of the several Gods of the Sun in Egypt. Ra was later to be joined with Amun after the second re-unification of Egypt by a king of Thebes (Ahmose), and thus Amun of Thebes (like Horus before) rose to a pre-eminent position. It’s interesting to note, however, that during the first re-unification, which also was achieved by a king of Thebes, the tutelary God of the city was different: Montu, and this God also arose to a supreme theological position for a time.

The Enuma Elish was Babylonian theology and it was used to elevate the rank of Babylonians in Mesopotamia. An early nation-state was forming there, just as with Egypt before, and the Sumerian Eannutum (a little earlier than Sargon) was actually the first true founder of imperialism in the region. The Assyrians, much like the Thebans in Egypt, later replaced Marduk with their own tutelary God Ashur, in order to attribute their new power to him. And when Babylon rebelled, a myth was commissioned by Sennacherib the Assyrian King, where Marduk is brought to trial by Ashur and found guilty! The nation-state ultimately failed in Mesopotamia and that is a reason why the theologies of that region are much more easy to comprehend than any attempt at a unified Egyptian theology. In fact, any unified Egyptian theology makes little sense, and I have a theory that Akhenaten’s monotheism grew out of that confusion and struggle for power.

I have reflected on this topic of divine genealogy and hierarchy (the two are related) for some time past, even as it regards the Hellenic pantheon. The Gods are the Gods, but their changing positions can be traced sometimes to certain events. There is no unified scripture, and thus myths and epic poems take their place. Homer sung about a Greece that was soon to be dominated by Dorian peoples, said to be descended from Herakles and whose tutelary God was therefore Zeus. It’s actually plausible Poseidon might have risen to a pre-eminent position if the Mycenaeans had continued, because although Zeus was important, he was not as exalted as later. So, there may after all be some truth to what Herodotus says about Homer and Hesiod, in that they established the positions of the Gods and distinguished their functions more neatly.

Lastly, one observation: Since you mention the notion of paterfamilias, I can’t help but notice its centrality within civilization in general. It’s also expressed within the desire to end “chaos” by power (it’s interesting Tiamat is made female) and thus, by extension, is attached to imperialism. We see a hegemony of male Gods over female ones, or at the very least, the masculine over the feminine. The Athenians were actually the most patriarchal in all Greece. I think my position against imperialism has made me somewhat of a “feminist” in this respect–civilization is a kind of masculine chaos in itself that needs to be controlled. 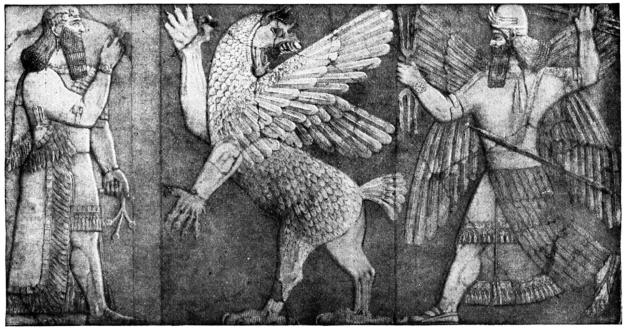 During the Bronze Age in Mesopotamia, empires rose and fell. In the Enuma Elish, the creation story of the Babylonians, this is told in mythic terms. One part of the Enuma Elish tells of the rise of the Sumerians. Their generation of Gods were Anu (An), Enlil (Ellil), and Enki (Ea), who focused on developing agriculture and decreeing divine law. While Anu ruled the Gods, Enlil granted kingship, and Enki created people. These Gods had overthrown Tiamat of the Saltwater and Apsu of Sweet Water, the original Gods of the Ubaid people of the late Stone Age.

The Sumerians drained the swamps, dug out the canals, and began irrigation. They tamed the “sweetwater” thereby killing Apsu as a God. Moreover, they transformed the salt marshes into farmland. Then in 2330 BCE, Sargon of the Akkadians established the first empire. He began the first dynasty by deciding that his son should…

4 thoughts on “The Enuma Elish: History as Mythology”