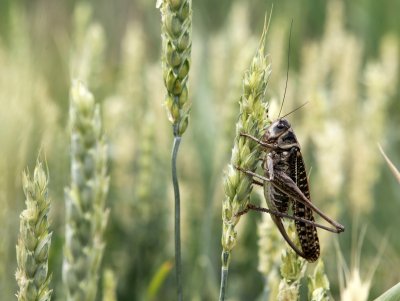 In the first essential distinction, the tree was used as the beautiful emblem of the polytheist in general, and the forest represented community in its collective strength of many trees. Here the emblems will be natural once again, suitable to the topic in hand; nothing can be better compared to evolution and revolution, as notions and modes of change, than the children of the Earth. As all change is inevitable, it remains for us to understand how we can best benefit from it, rather than be swept away by its current. When any polytheist looks back in time, this idea of change is of great concern, considering how ethnic and original religions waned into oblivion; by looking at future time with foresight, a polytheist will also feel a sense of anxiety, as to how this budding religion, painfully restored, will survive and grow on.

In this regard, a polytheist should think and act like a farmer who learns from past failings with his crops, and applies his knowledge to improve future harvests, not only for himself, but his family, community and descendants to come. He must observe changes, make trials, and discuss the consequences with his fellow farmers, as to which seeds should be selected, how the land should be tilled, grubbed or plowed, whether the tools need improvement, which animals will best serve, what exact days within the seasons should be employed. While refining these methods of his theory and practice in agriculture, a farmer may be said to undergo a sort of evolution: By noticing the slow and subtle changes of nature, he attempts to benefit by adapting himself gradually to it. In doing so, the farmer does not subject nature, but only harmonizes himself with it; he seeks to perpetuate the beauty and presence of nature, and at the same time, enjoy her bounty. If anything goes wrong, the farmer must learn further under some hardship, but whenever greater forces will it, he succumbs to the Gods and returns to them.

Animals and insects, being children of the Earth, are bound by this necessity of natural adaption and evolution. Although these beings are small, they are not below notice, nor so useless that we cannot learn anything from them; quite the contrary, they are often very clever and orderly in their actions and understanding of their habitation and the world. In spite of our learning and languages, we are often so baffled to comprehend our condition and changes, that we are at last forced to examine, or as it were, consult with these creatures for advice. Indeed, it not only possible to observe the notion of evolution among animals, but also the more unusual practice of revolution. Revolution may be defined as a quick change, arising through great numbers for a short time, and causing a great imbalance. We may be inclined to think that it is only people who behave in this disorderly manner, but the truth is, we can see it in nature too, especially with locusts.

The lessons that can be gained from the evolution of the farmer and the revolution of the locusts are greater than could be presented here. It is known aid that when locusts see a new sudden source of food, after suffering from hunger, they are inclined to swarm together for some time and gobble up whatever they find during their roaming flight, as if in a frenzy. The behavior of these locusts is necessary for their own survival, and they do accept to pay a price for the damages they cause. Farmers may not be able to stop them, but they often make up for their losses in crops by eating some of the stuffed locusts themselves, which is still done in certain parts of the world to this day. Difficult times often compel creatures to act in an unusual or even unnatural way, as if breaking the rules of evolution, but since this is inevitable with them as it is with us, it is absolutely necessary to learn how the hurtful effects of revolution can be curbed and restrained, till the frenzy passes and harmony returns.

In the case of people, difficult times are often aggravated by an unwillingness to act with understanding or foresee the consequences of a revolution. For this reason, story-telling and myths in general provide simple and excellent lessons taken from nature, but suited to our understanding. In regard to this point of revolution, I will use a fable of Aesop from the Hellenic tradition: it is an allegorical story famous for its application to politics, namely, the fable of the belly and members. It is reported by historians that during the secession of the Roman soldiers in 494 BCE, a sort of popular revolution aimed at the aristocracy of the Senate, this fable succeeded in putting an end to the troubles of state. The people “swarmed” because they were too many debtors unable to pay the taxes imposed by the state, now impoverished after the war with the Sabines. After a hero of the war appeared in the forum with scars to complain of the harsh handling he had received from the tax-collectors, uproar spread throughout the city and after concessions were refused, the soldiers declared a secession. The Senate chose a man by the name of Agrippa Menenius Lanatus, a former consul, to negotiate with the rebel soldiers.  “It once happened,” he told them, “that all the other members of a man mutinied against the stomach, which they accused as the only idle, uncontributing part the whole body, while the rest were put to hardships and the expense of much labour to supply and minister to its appetites. The stomach, however, merely ridiculed the silliness of the members, who appeared not to be aware that the stomach certainly does receive the general nourishment, but only to return it again, and redistribute it amongst the rest. Such is the case,” he said, “ye citizens, between you and the senate. The counsels and plans that are there duly digested, convey and secure to all of you your proper benefit and support.” By this means, the frenzy of the soldiers cooled without further disturbance and the Senate conceded to the formation of the Tribune of the Pleibians, a political body which gave rights to the common people and soldiers.

Let us polytheists imitate such wise instances in of our ancestors, rather than revolt like the early Christians who abandoned their ethnic culture for a false god and the atheists of today who abandon all law for a selfish anarchy. Let us restrain ourselves from the revolution they so much love, and embrace the evolution of nature and our ancestors; by this means, we will grow strong slowly and outlast them.